The Second Coming of the New Billion Dollar Crop

Hemp has been cultivated for millennia with carbon tests dating hemp back to 8,000 BC. In North America, hemp is thought to have arrived with European settlers. During the 17th century, farmers in Virginia, Massachusetts and Connecticut were ordered by law to grow hemp. By the 18th century, a person could be sentenced to jail for not growing hemp. Interestingly, for over many years, hemp was also considered legal tender to pay taxes in America - how times have changed!

Hemp was used for many things over the years including as a building product (hempcrete), textiles, rope, sails and many other applications. Illustrating the potential, in 1938 Popular Mechanics published an article that described hemp as the “new billion-dollar crop.” The article went on to demonstrate “over 25,000 uses for the plant ranging from dynamite to cellophane.” Hemp was coming into its own as a viable crop for North American farmers and a potential solution for literally thousands of consumer needs. Around that time, Henry Ford also built a prototype car made to run on hemp-derived biofuels with a body made of hemp-derived plastics. 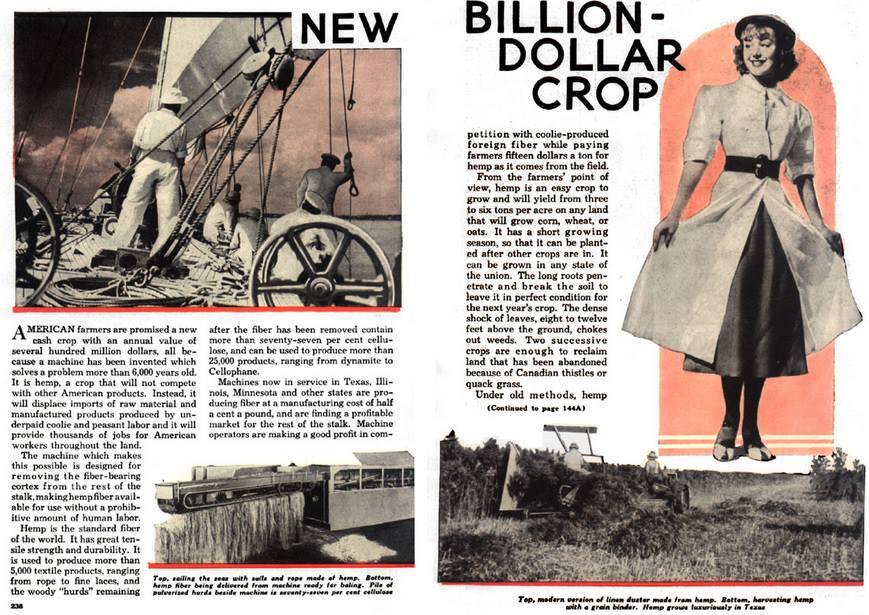 Unfortunately, while hemp had the potential to be a 'billion-dollar crop', this potential was thwarted by politics. Although Hemp and Marijuana have very different uses and it is impossible to get 'high' off industrial hemp, nonetheless, hemp was caught up by the introduction of the United States Marijuana Tax Act in 1937 which effectively outlawed both crops. Other than a brief period during WWII where American farmers were managed to grow hemp for the war effort, hemp has remained illegal to harvest in the United States until very recently. Canada and most other nations followed suit.

Hemp For Victory (1942) Department of Agriculture. Office of Public Affairs.

Hemp Is Back And About To Be Bigger Than Ever

Canada passed legislation in 1998 to re-legalize hemp cultivation. As depicted below, acreage grown for hemp has grown meaningfully but it is still considered a niche crop representing only <1% of agricultural land in Canada. To date, most of the hemp grown in Canada has been for the purpose of hemp seed (food uses) but the upcoming legalization of CBD extraction together with increasing industrial demand for green products is expected to be a major boost to hemp growth in Canada.

Blue Sky Hemp Ventures provides a range of sustainable, high-quality, and exceptional value wholesale hemp products throughout North America and around the globe. Established in 2017 in Rosetown, Saskatchewan, Blue Sky is GMP-certified and expects to achieve EU-GMP certification, the most rigorous standard for producers of medical products, by 2020.

Blue Sky Hemp Seed, Oil, and Protein Powder are available now. Fibre and CBD will be available in early 2020.

You must be 19+ to view this page. Please provide your birthdate to confirm.